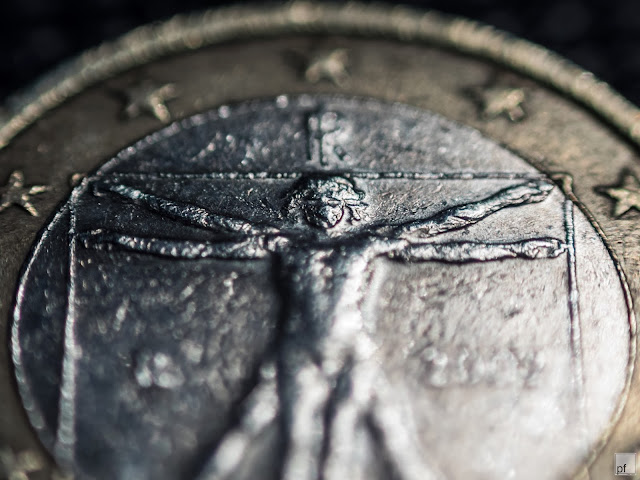 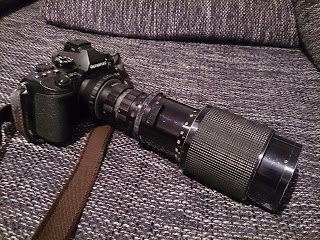 Some fooling around with an old lens.
I used a Vivitar 70 - 210mm f3.5 with three macro adapters and a M42-m43 adapter to use with my E-M1. Minimum fokus is inside of the lens barrel with this combination, the coin touched the front lens as I made this pic.

The lens produces some CA which Lightroom thankfully removed.

Posted by Peter at 19:30 Keine Kommentare: 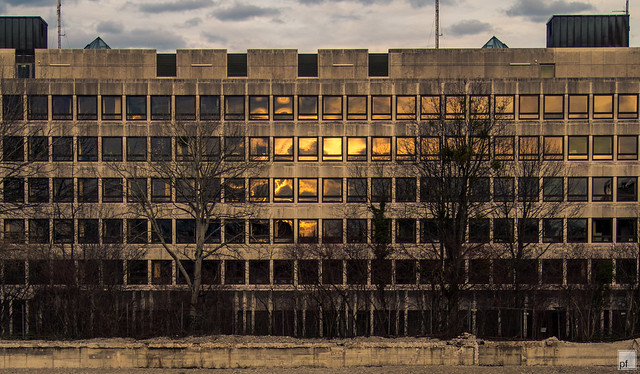 The sunset, mirrored in hundreds of uniform windows set in brutal concrete.
I love the geometry paired with the colours.

Posted by Peter at 23:10 Keine Kommentare: 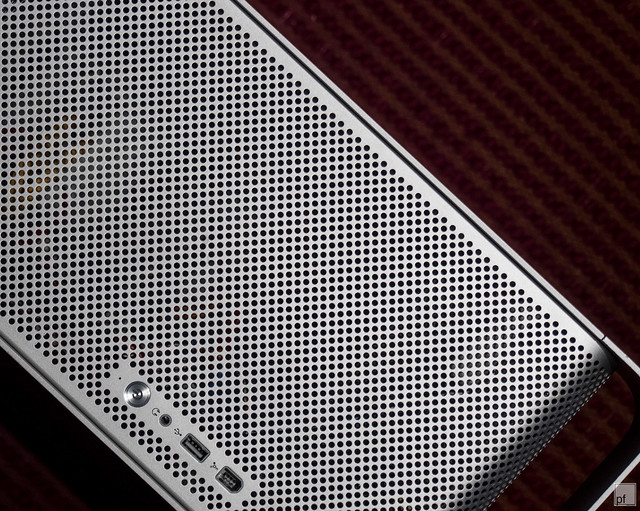 Somewhen 2008 I've bought a cleaned out Power Mac G5 case from a nice austrian guy. I had vague plans to make it into a PC case but hadn't really looked for info how other people did that. Turned out that it wasn't really easy to turn such a case into a normal PC case, at least if you still want to use the normal ports on the mainboard or want your front panel to work. So I neglected the to project and the case turned into a small table beside the couch.

5 years later, I stumbled upon the site of Laser Hive from the UK and found their amazing collection of modding kits. I sensed the possibility to get more out of the case then a table and ordered a 'G5 full ATX kit with 120 fan, lower PCI-e slots and power connector hole (b)' and some parts for a bit over 100€.

After the kit arrived I managed to get everything up and running in less then 24h. Most work was done on one Saturday.  Sorry, no pics from the work, I always forget to take some. But it wasn't difficult anyway, planning the cuts on the back and cutting them with a cheap Dremel clone was the longest part.

Some specialities I want to mention: 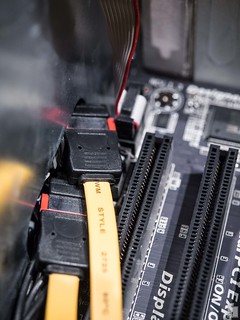 I used the HDD trays as is, with all cables as stock. The power lines I've soldered together and connected to the PSU as one, for the SATA cables I've bought two 30cm extension cables for 2€ each.

I felt I need a reset switch and glued on in at the bottom of the case. All but invisible, but easy to reach.

The PSU rests on a thick slab of soft rubber and blows out of the front. It's fixed on the sides by cork. Not perfect but really quiet. Just never forget not to turn the thing upside down.
Um, yeah, I'm looking for a better solution. 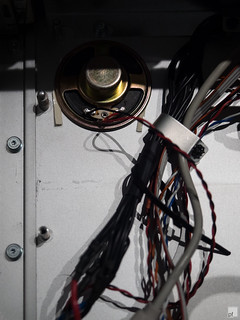 I soldered the front panel connector myself. Easy job with all this help. I skipped Firewire. The cables (which are a bit short) are fixed by bended metal stripes which are screwed on some original system board mounts. And I mounted the speaker with some double sided tape.

The case still got all the original G5 fans, but the are really loud, even with a temp control circuit. The 12cm back fan is a Noctura NF-S12A and is really silent. I've installed a new HDD fan in place of the original one (Some Arctic cooling fan I had lying around).

And the DVD burner tray needed it's front removed to fit through the gap. 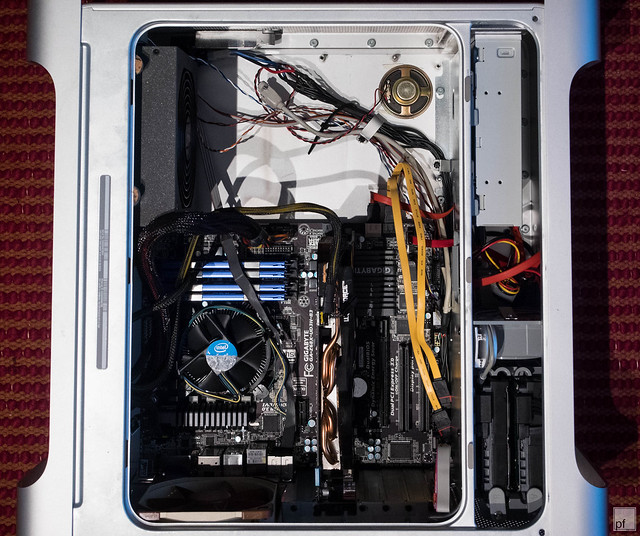 Looks great under the desk and performs well as a Hackintosh (well, it did that already...)

For completeness, the hardware: 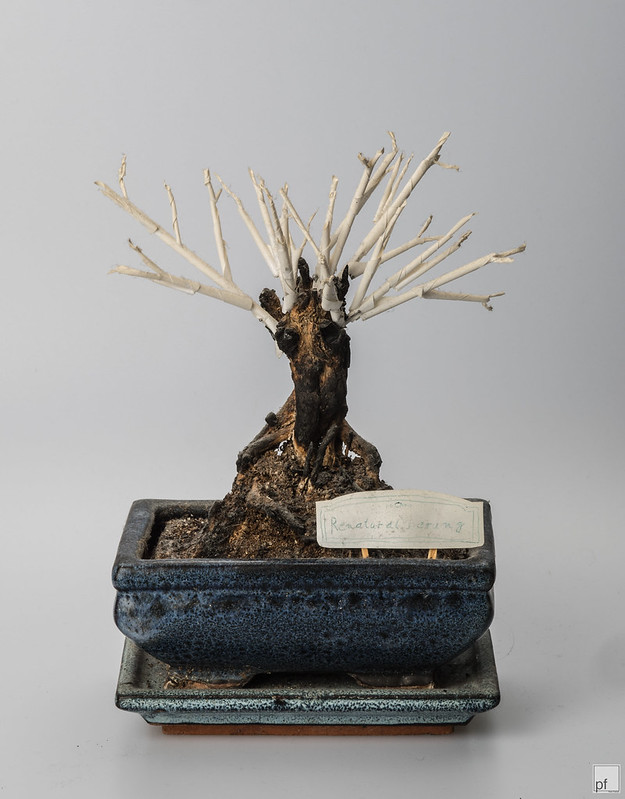 A very old piece of mine. Dissatisfied with the way a cheap bonsai grew (being dead, after me being away for two weeks), I poured pure alcohol over the thing and lit it up.

Watching the flames I started building new twigs out of paper and, after it had cooled down, pinned them to the dead trunk.  The sign reads 'Renaturalisierung' - renaturalization in german.

It spend the last 10 years on top of a kitchen cupboard thats why it looks to dusty. I tried to clean it, but it crumbles at the touch. 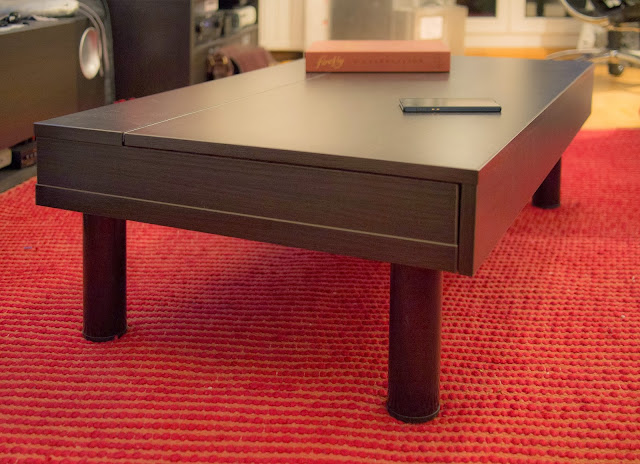 We were lacking a living room table for some time now and stumbled upon a sale of 'Vika Veine' tables in our local IKEA. It's designed to be a small folding desk and does that job quite nicely. It even has a hole for running cables inside. 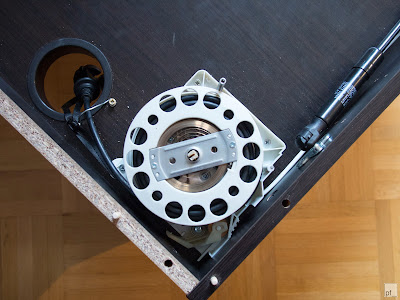 We didn't like the legs IKEA offered for it and bought heavy 40cm black ones at a hardware store. They are kinda cool as they come in different length but all have the same screw-on base. So we can just change the legs and use it as an extension for our kitchen table.

Anyway, I wanted to store all my game controllers and remotes inside. I really wanted to charge them in it as well. I could use the useful hole in the bottom of the plate to run a extension inside whenever I need it, but that would be awkward and boring. So I did what everyone would do - ripping an old vacuum cleaner apart! 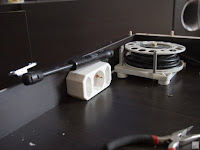 The automatic cable reel I found in its guts is perfect for putting in a corner in the table. It's the kind that has a pushable brake to prevent reeling the cable in (as opposed to the kind where you pull a little bit to loosen it). I fastened a short lanyard on it and modified a 3-outlet adapter to work as a small power strip. Sadly I messed up and put it to close to the hydraulics. Oh well... 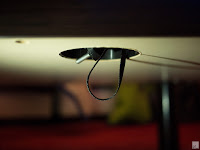 The table has enough space for all my controllers and other related stuff. I can charge everything inside and when done, just pull on the lanyard and reel the power cord back inside and out of the way. Very cool result for 50€ in parts and an old vacuum. =)