Will 'art' for cash 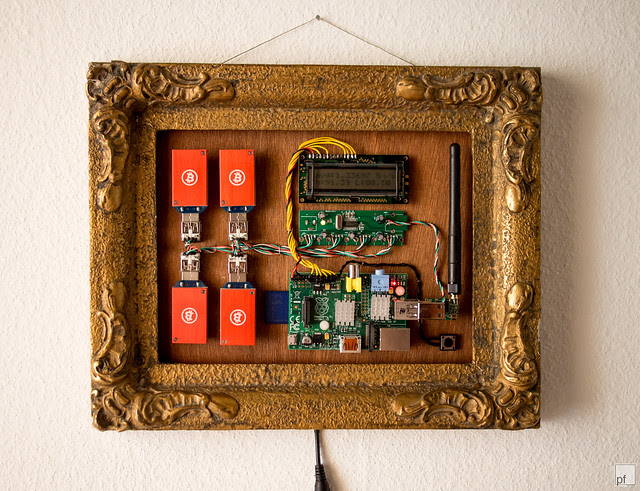 I don't like works of art that were made for the sole purpose of making money. I think true art always comes from the top end of Maslow's hierarchy of needs and never the bottom. Self preservation (aka making money) can be a later side effect but should never be the initial driver to create.

This point of view can be easily disputed as it disregards a lot of pieces that are getting displayed in fancy national or private art galleries as merely high quality handicraft. But I am an idealist in such things and doesn't let reality get in the way of my opinions. Needless to say I had quite some angry discussions with friends ("So you say Michelangelos 'The Last Judgment' in the Sistine Chapel is not art? omgwtf?!!").

Thinking about this again as I was looking at a few Banksy stencils I hadn't seen before, I had the idea to this: A piece of Art, created for the sole purpose of creating money. Literally! 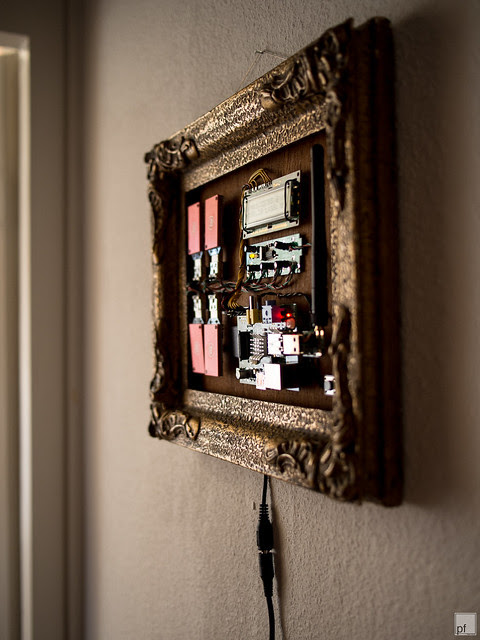 Mounted on a rosewood panel, inside the baroque gold-plated frame (thanks Bele!) is a small computer and four specialised computing units producing Bitcoins, the most known and used cryptocurrency. The small display shows the current rate of calculation and the exchange rate of Bitcoins to Euros. I took special care to mount the hardware and wires in a pleasing, clean way and removed all casings to show of the technology.

The hardware is able to calculate ~1.3GH/s. At the current exchange rate that amounts to around one Euro a day (simplified, bitcoins are complex business). Not quite in the same range as Jeff Koons but at least I don't need to fuss around to find a buyer.

My feelings for the piece are therefore split (as intended). I have all the pure joy of creativity, of bringing an idea to life and expressing an emotion. The other feeling is greed, being akin to the corrupt artist, thinking about the wealth it will bring me.

As a project it was awesome: Idea to finished product in less than a week. That's how I like it. =)

I used ASICminers for the rig and they are really something. The system has the same hashing performance as a PC with four high end GPUs, but at under 300€ project cost and under 10W of power it beats the traditional rig hands down on cost. And noise (none). And size.

The ASICminers radiate quite a bit of heat, thats why the red heatsinks are still in place.

The Raspberry only coordinates the data flow to the miners and (idles most of the time) uses most of its power to run bitcoind to help the bitcoin network and verify transactions for everyone.
Every 60 second it updates the display with current hash values and highest/lowers trade values from the biggest Bitcoin exchange Mt.Gox.


<update - 09/08/2013>
I modified the python script to switch the lower line between the Bitcoin exchange rates and the current balance of the target Bitcoin wallet every 60 seconds. I will publish the modified script on Github, I just need to clean it up a bit...


<update - 09/11/2013>
The cheap power supply melted in the wall socket. It was specified for 3A but could not handle that full time. Well, I've got my refund from Amazon and bought a Phihong PSA15A-050P which is build like a tank. The display has now a lot more contrast, too...